YOU'RE IN LUCK. You know why? Because you have just discovered THE 7-chapter Essential Guide to finding the top performing locations in 2022 with scientific accuracy — in less than one hour.
Are you ready to get started?

Statistical vs Fundamental research – the verdict

This article was written by Boomscore creator, Michael Fuller for the September 2013 Smart Property Investor (SPI) Magazine (but it's still a classic!)

Too much information is overwhelming, particularly for time-poor investors. How many times have you sat down to do your research, only to throw your arms up in the air in despair? Look at the back of any property magazine and you’ll find columns and rows of property data that are confusing and can be hard to navigate. In the age of PowerPoint, 3D movies and even holograms, why are we still staring at rows and columns of data? Our brains are not designed to process information this way. It is my mission to change how property data is presented – to give it meaning.

Our brains are wired to better interpret information that is graphically illustrated for easy comparison. To understand why the Boomscore 'spidermaps' are valuable, my company, Boomscore (previously known as Hotspotcentral), created an algorithm called the 'Boom Score' (previously known as the DSR - Demand to Supply Ratio Score).

This Boom Score helps investors pinpoint suburbs that have the greatest chance of imminent capital growth based on how they compare across eight indicators of demand and supply. The Boom Score works on the basis that we all agree supply and demand determine the price of goods and services.

>>> Property is no different.

A score also makes it easy to sort 15,000 suburbs from best to worst. Instead of examining reams of suburb statistics from all over the web to arrive at a handful of suburbs that are comparatively better, you can now do it all using the very simple Boom Score – in a simple web 'app' called Boomscore. You can get Boomscore here.

Computer data is made up of zeros and ones, yet it can still turn a rubbish story into a visually exciting 3D movie. Can’t we do the same with property data? This is where the Boomscore ‘Spidermaps’ concept was conceived. It’s not a 3D movie but it certainly helps bring visual context to boring property data.

To make sense of property statistics in print, we needed to make them searchable, comparable and relevant. Boomscore makes this possible, but the big question remains:

How do we make suburb data more relevant in a magazine or visually?

Instead of publishing pages and pages of Boomscore suburb data, we created the Boomscore Spidermaps. Spidermaps make it easy to visualise why the whole Boom Score is greater than the sum of its parts (the eight underlying demand and supply statistics). So, the auction clearance rate or vacancy rate statistics are, individually, good indicators of the demand for an area, but combining them spatially into a single view using a spidermap takes it to a whole new level. Best of all, you don’t even need to know the actual value of each statistic until the very end.

Let's look at some examples: 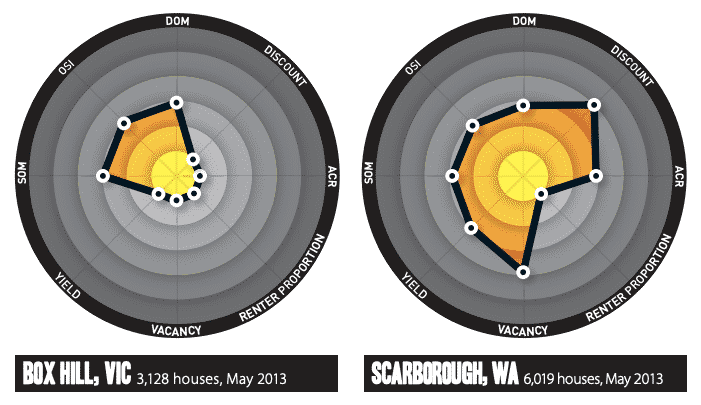 If I told you that the suburb with the most colour in the spidermaps above had a higher chance of capital growth than the other, which would you choose? The answer of course is Scarborough. Without even knowing why, you have correctly chosen a suburb that compares better across a range of statistics from a wide variety of well-known sources. Days on market (DOM) for both suburbs sit about halfway between best (the outer boundary) and worst (the centre of the spidermap). Each statistic has been benchmarked against industry standards, so the closer they are to this benchmark the better they score. A property market that is in ‘balance’ would have the eight supply and demand statistics plotted exactly half way between the outer boundary and the centre.

The title of this section refers to Redback spiders. When you can see mostly red, as in the Menai, NSW spidermap, you can be sure Menai’s property statistics get just about a perfect score compared to most other measures in the winning Scarborough example on the previous page. Is Menai, NSW a potential hotspot? It certainly has the makings of one and if you were comparing it to Scarborough, it would be a better choice. There’s more to consider, but for now, the ‘Redback’ suburb, where there is more red than not on the spidermap, is better. If you can’t see much red, stay clear or you could get stung! 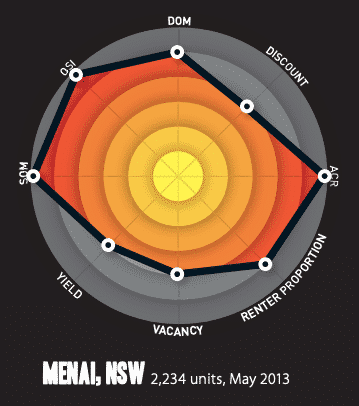 It’s that simple. What about spidermaps and your strategy? Not every suburb is the same when it comes to your chosen strategy. Let’s say you were thinking of ‘renovating to flip’, what could a suburb’s spidermap look like in this scenario?

Looking at Wantirna South in Victoria, auction clearance rates are high, so you’ll sell when your project is finished. Discounting is balanced relative to the market. Days on market is low, so you won’t have to wait long to sell. If you need to hold on completion for whatever reason, there are sufficient tenants to target. Price might be high relative to the yields, which would be typical of a high capital growth area if this applied to Wantirna South. Boomscore tells us the typical price for Wantirna South is $606,000, which is much more accurate than the median value. 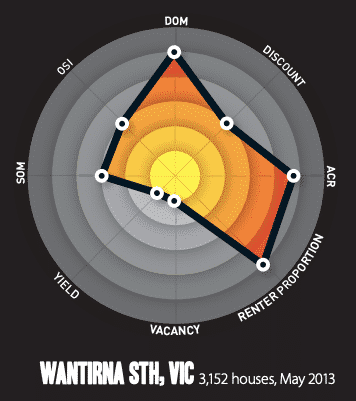 Another example: Buying off the Plan 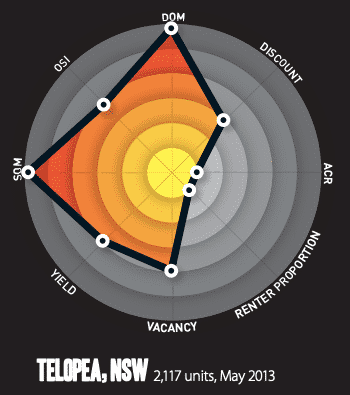 Let’s say you wanted to buy off-the-plan. The spidermap for your suburb would be typified by a low percentage of ‘stock on market’ (low supply) and low ‘days on market’ (high demand). Telopea, NSW could be a good option. We can see yields are better than average, as are vacancy rates, which Boomscore puts at 1.4 per cent for May 2013. The ‘auction clearance rate’ (ACR) is not great, but you can use this to your advantage when negotiating, with the added knowledge that ‘discounting’ is five per cent – perhaps a starting point on price.

So far we have only glimpsed four of the eight indicators, but you get the idea. Hop over to Boomscore to check the readings for each of the eight statistics and see the trends for your suburbs of choice. It’s the statistics and trends that determine if the location is an emerging hotspot.

The spidermaps and Boomscore make it easy to find the hottest locations before the pack arrive, pushing up your property values. I’d encourage you to look at the spidermaps in this blog and check out the Boomscore 'app'. These tools merge the art and science of property investment and save you huge amounts of time.

Want to learn more? Click here to access Boomscore's free research materials to help you learn how to research the property market in Australia with scientific accuracy.

Boomscore provides incredible value as a property market research tool that has been refined over more than a decade. Like any tool, how you use it will influence your success. Tell us where to send you our best articles on property market research. You'll never get blasted with rubbish you didn't ask for and a maximum of one email per week or less. Quick but valuable stories and articles to keep you excited and on track. It's up to you now to take action!